Employees at York IE, a strategic growth and investment firm, were provided sit-stand workstations for ergonomic relief and comfort. Survey and usage data was collected over the course of several weeks to gauge the impact on employee health and productivity using StanData’s workstation analytics technology.

StanData, a workstation data company, worked with York IE’s employees to connect its software to their height-adjustable workstations, encouraging them to transition their movement throughout their day, while gaining insights from real-time data metrics.

Using StanData’s proprietary technology, York employees found there was a 210% increase in their daily transitions, while 70% of participants reported having noticeably more energy and 67% felt more engaged in their work. Users also reported a 13% increase in their productivity, based on a self-perception index.

Many remote workers are using conventional, or makeshift, desks and office chairs without proper ergonomic setup. This can lead employees to leave their desk to get up, stretch, or walk around in an attempt to “loosen up”. These frequent “breaks” result in a significant amount of lost productivity. The biggest ROI of adjustable-height workstations is the ability to recapture this lost productivity. This was demonstrated in this case study with York employees, proving the key to adjustable-height desk usage for most individuals is through frequent posture changes.

Dr. Joan Vernikos1, research scientist and former director of NASA’s Life Sciences Division, agrees that standing up against the force of gravity several times a day has many healthful benefits. Despite the proliferation of sit-stand desks in the office environment, it has since been reported that:

The need for breaks and changes in body positions is apparent and there is increasing evidence1,6,7,8 supporting the health benefits of transitional movement where users can freely switch from a sitting position to a standing position throughout their workday. Benefits of frequent posture transition may include:

Long periods of sitting can have significant long-term impact on health and wellbeing. A sedentary work lifestyle can lead to muscle degeneration, increased fatigue, and an increased risk of developing chronic diseases such as type 2 diabetes, cardiovascular disease, and many cancers. 4

Alternatively, it’s important to recognize that standing all day is equally harmful to overall health. The body is simply not designed to have the same posture or load placed on it continuously. Standing for long periods can lead to lower extremity joint pain, muscle cramps, back pain, blood pooling and varicose veins.5.

Another ergonomic benefit that users often see, that StanData measures, is a reduction in physical pain or discomfort. York reported no measurable change in this area, likely due to their employees being of a younger, more active demographic.

StanData has demonstrated the ability to change sedentary work behavior through its software solution, which provides timed reminders to alter posture in addition to ergonomic guidance about proper positioning.

StanData’s workstation technology encourages employees to transition their bodies often and replace fatigue, poor posture and chronic pain with focus, increased energy, and productivity. The benefits of integrating such technology to ANY hybrid workstation results in more physical movement, which translates to increased employee satisfaction, engagement, and human performance in addition to a quantifiable ROI for the employer. 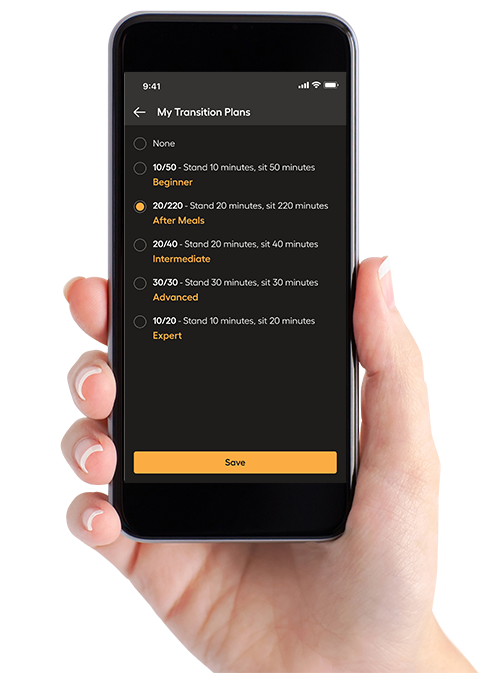 Having a tool that generates transition reminders to go from sitting to standing has given me deeper insights into my daily movement patterns. I have seen a dramatic increase in my productivity while improving my overall energy levels. The ease of use, customization, and ability to integrate the software into my height adjustable workstation is giving me a whole new way to work more effectively.